lokakuuta 18, 2017
Today I got to know about Polish food and I will write about it in English because I don't think that I could get the translation in Finnish very good.. 😅


So. What you need to know about Polish foos is that they have a LOT of periogi (dumplings) and pancakes.

In the dumplings there seems to be pretty much anything. It can be sweet with some fresh strawberries and mousse inside of it or it can have meat with mushrooms. Or a lot other stuff. There's no use of saying oll the different variations I believe 😁. In the pictures below you can see (from the left) pierogi, hooves dumplings (kopytka), Silesian dumplings (kluski śląskie), Polish dumplings (pyzy, 2nd row) and Greater Poland steamed dumpling (Greater Poland is part of Poland) (pampuchy aka kluski na parze) which is kinda like a soft dumpling. You can find also other variations of dumplings that I won't put in here.

Then. The pancakes. It's pretty much like the dumplings. It can be sweet dessert or proper lunch after which you won't feel hungry. They even have a chain called Manekin which has pretty much only different kind of pancakes (I will try this for sure). In pictures below you can see (from the left) a (sweet) pancake / crepe (nalesniki), pancakes made of potatoes (placki ziemniaczane) and Brigand's pancake (placek po zbójnicku).

Poland also has at least two dishes which contain cabbage. They remind me of Finnish cabbage caaserole (kaalilaatikko). In below from the left are Polish Hunter's stew (bigos) and Polish cabbage
rolls in tomato sauce (gołąbki).

Poland also has some fish (ryba) dishes. One of them is fried carp (karp smażony) which is eaten during Christmas. Seems like the Christman dinner isn't complete if there is no carp on the table. You can even find some funny videos on YouTube about people fightting for carp. It is believed that carp brings you good luck (I think I have heard about this also from China or somewhere else in Asia).

Polish people also seem to like a lot of mushrooms. One of their dishes is scrambled eggs with chanterelle and bacon (jajecznica z kurkami i boczkiem). I heard that this (as many of the ones above) is 10/10. I don't like mushrooms but I guess I have to give them at least a chance in Poland.

Other dishes that I heard that I should deffinitely try ar (from the left) rosół, makowiec (seems pretty much like Finnish Swiss roll aka kääretorttu), chrusciki,  sernik (Polish cheese cake), paczki (which is full of for example vanilla custard) (Polish donut, they even have a day for eating this and it is called Fat Tuesday!) and piernik (Polish gingerbread, normally eaten during Christmas) (I heard I should try especailly the ones they make in Torun and from those especially katarzynki).

Hopefully I managed to make you drool while reading this text! 😁😉😋 (at least I got myself to desire some sweets). 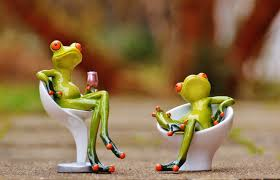